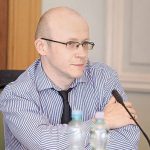 For the past 15 years Oleksandr has been contributing to the OSCE PCU projects helping Ukraine to align its institutions and practices to international standards in the sphere of: constitutional and judicial reforms, including Constitutional Court reform, rule of law and human rights, criminal justice reform and establishing of national torture prevention mechanism in detention facilities under the UN OPCAT.

In 2014-2019 Oleksandr was a member of the Judicial Reform Council and served as a consultant of the Constitutional Commission. Since 2004 within project co-operation with various parliamentary committees and structures he authored more than 500 expert opinions on bills focusing their compliance with international and European standards as requested by the committees and other state authorities, as well as provided several consultative opinions (amici curiae) upon requests from judges-rapporteurs of the Constitutional Court of Ukraine.