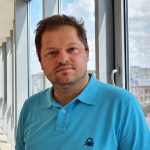 Dmytro Vovk is Director for the Center for the Rule of Law and Religion Studies at Yaroslav Mudryi National Law University in Kharkiv, Ukraine. He is a member of the OSCE/ODIHR Panel of Experts on Freedom of Religion or Belief (2019-2022) and an Academic Advisory Council of the Constitutional Court of Ukraine. He has been an international and national expert on human rights, the rule of law and religious freedom for the UNFPA Ukraine, USAID, Freedom House, the Institute of Global Engagement. He is a member of the editorial board of the Journal Philosophy of Law and General Theory of Law and Journal Religious Freedom. He has provided translation from English for Ukrainian academic journals, including authors such as Ronald Dworkin, W. Cole Durham J., Paul Gowder, Norbert Horn, Martin Krieger, Brett Scharffs, Kaarlo Tuori, and Carl Schmitt. He has written articles, chapters and books including Political Religion and Soviet Law (forthcoming), Religion during the Russian-Ukrainian Conflict (Routledge, 2020, co-editor), Law, Religion and Cinema (2018, in Ukrainian). Dr. Vovk was a Kennan-Fulbright Fellow at the Woodrow Wilson International Center for Scholars (2017), and was a member of the inaugural Class of the International Center for Law and Religion Studies’ Young Scholars Fellowship on Religion and the Rule of Law held at Christ Church, Oxford, UK in 2018. He was a visiting scholar at the International Center for Law and Religion Studies, BYU Law School during 2018-2019. He co-edits the ICLRS blog “Talk About: Law and Religion”.