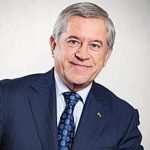 President of the Ukrainian League of Industrialists and Entrepreneurs, Prime Minister of Ukraine (2001-2002), Ukrainian politician and statesman.